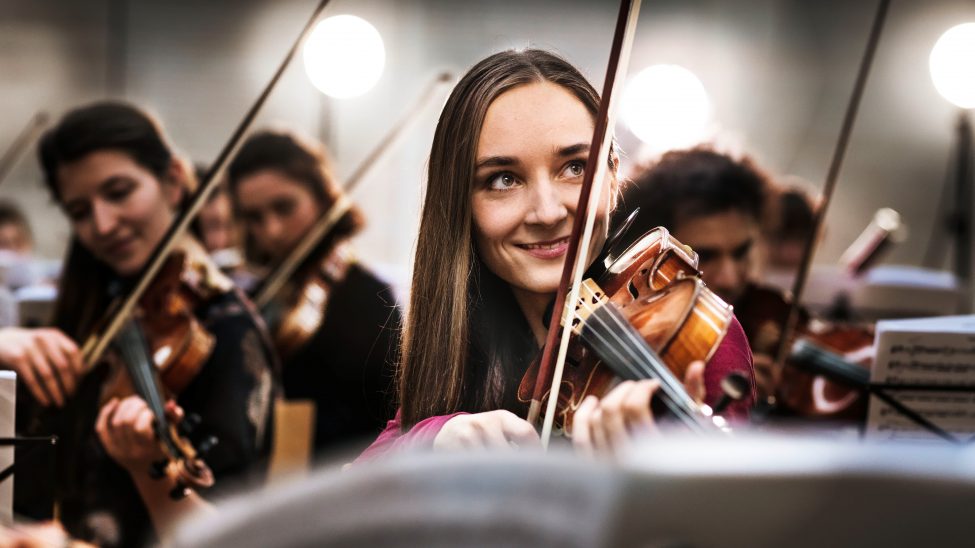 “Playing in the orchestra of the University of Vienna has accompanied me throughout my entire studies – from my first lecture in the bachelor’s programme in Mathematics to the master’s thesis I am currently working on. The rehearsals provide an opportunity to find balance to studying and I have gotten around quite a bit with a variety of projects. What I appreciate the most is that you get to know many different and interesting people.

When I finished school, I was not yet sure about studying mathematics. I had always been interested in languages as well. So I spent a year in Moscow to learn Russian after graduating from secondary school. But as I prefer logical reasoning to writing long texts, I decided to enrol in the degree programme in Mathematics at the University of Vienna after returning home. I have never regretted this decision. I have always enjoyed going to the lectures and I particularly appreciate the committed lecturers and the excellent student-teacher ratio at my Faculty.

I did not bring my violin to Russia, so I did not play for almost a year. I became aware of the University of Vienna’s orchestra through the university website and registered for the auditions. Had it not been for the motivation that I gained from playing in the orchestra, I would probably not have found much time to play the violin during my studies.

We play grand symphonies and popular pieces, but also demanding and less known works. Among others, we performed two symphonies composed by our conductor. We usually perform together with the choirs of the University at the Main Ceremonial Hall and in churches, but also at the Wiener Konzerthaus or at the Musikverein. One time, I even participated in an excursion to India where we performed together with Indian adolescents.

Rehearsals are great fun and a welcome change from the abstract concepts of mathematics but, of course, they are also hard work and require a lot of concentration. Our programme is often rather difficult and we sometimes have longer rehearsal sessions on the weekends, in addition to our regular rehearsals. This requires plenty of commitment, but it has also allowed us to achieve a lot. Moreover, I believe that being part of such a community has helped in developing my personality and I have learned a lot for life.” – Marlene Hangl

Marlene has studied Mathematics at the University of Vienna.