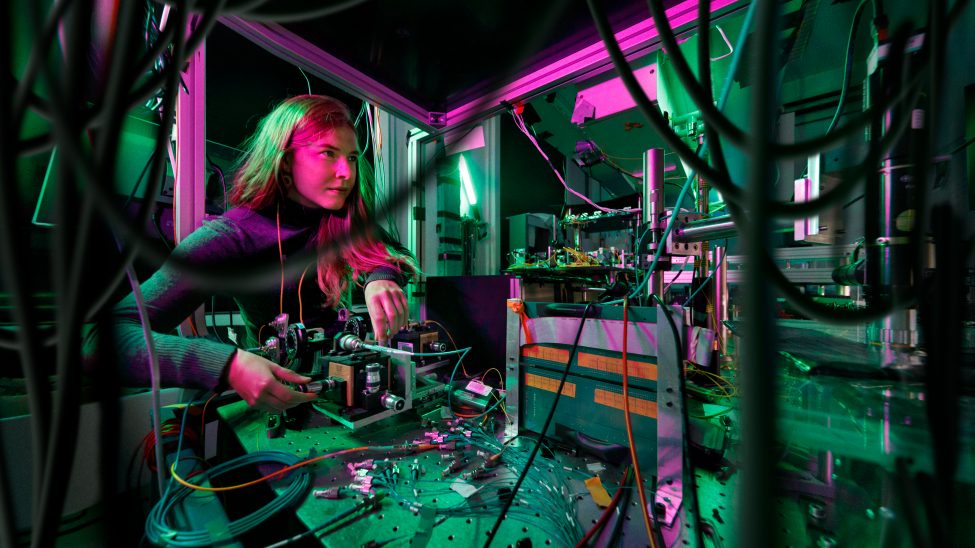 Imagine a box filled with black or white balls. When we take a white ball out of the box, we are used to thinking that this ball has always been white. It would be counter-intuitive to assume that this ball is white only now because I see it right now, right? This intuition does not apply to smaller objects. This means that the ball can be white and black at the same time and only appears in a certain colour once I take it out of the box to look at it. This is the so-called superposition principle. Another important principle in the world of quanta is called entanglement. It means that the properties of two objects are correlated.

If you have never heard of this principle before, you might point out that this can in no case work. In fact, many physicists are confused by this theory as well – there have been many attempts to explain quantum mechanics. This is the best-known interpretation: Interactions between a measuring instrument and the physical object that is supposed to be measured cause the superpositions to collapse. So, the property of an object only becomes reality by measuring it.

I was fascinated by quantum mechanics exactly because of this inherent elusive character. The principles of superposition and entanglement are the corner-stones based on which academics around the world try to build secure communication or better computers. In future, this will open up unimaginable possibilities and especially increase computing powers immensely.

To contribute my share to this future, I decided to write my master’s thesis in this research area. I was able to prove in my experiments that quantum effects also lead to an increase in computing power when applied to certain machine learning algorithms. As my experiment uses photons, the University of Vienna – as the top performing university in this area – provides the perfect environment for my work.” – Beate Elisabeth Asenbeck

Beate studied Physics at the University of Vienna.

P.S.: On 11 Feb students of the Vienna Doctoral School of Physics (VDSP) organizes a conference highlighting the “International Day of Women and Girls in Science”. The event will feature the careers and experiences of women in science in keynote talks and scientific flash talks. For further information, please follow this link.

“Starting with English and American studies – ending up in IT. The path in-between has taught me a lot, was challenging and definitely not something you can plan in advance. The University of Vienna has shaped my professional career from the very beginning. I started as a student in English and American Studies and took … Continued