Endowed with innate capacity and brain mechanisms, babies master the grammar of their native language within just a few years. By 10-12 months, they are tuned into the speech sounds of their native language, and disregard those of nonnative languages. From about 18 months, their vocabulary starts to grow rapidly and by 3-4 years, children have mastered the basic grammar of the language, producing full-fledged sentences. Children achieve this amazing feat naturally and spontaneously, as long as they are exposed to the language in meaningful face-to-face social interaction with caregivers.

Learning a system of meaning

Learning the grammar of a language means more than just learning its system of speech sounds and linguistic forms. It also means learning its system of meaning (semantics), a particular way of organizing and representing things and events in the world. Semantic systems are by no means universal. This is true even of a fundamental cognitive domain such as spatial relation of objects. For example, in German (and English), object relations [‘apple IN bowl’/’apple AUF/ON plate’; ‘finger IN ring’/’ring AUF/ON finger’] are classified topologically, in terms of whether X is contained by Y (=IN) or not (=AUF/ON). But this seemingly straight-forward classification is not universal. Korean, for example, takes a very different approach in dividing up object relations: Its classification system is based on whether X fits tightly with Y (=KKI) or not (=NEH). Thus, in Korean, putting ring ON finger and putting finger INTO a ring are conceptualized as same relation whereas in German, they are of different (or even ‘opposite’) types. These spatial words/concepts are acquired very early in life, thus the corresponding viewpoints can get deeply embedded in the way we think about objects and relations in everyday life.

What is the relationship between language and thought?

In the last few decades, until 1990’s, the predominant theory was that language and thought/cognition are separate entities and that universal cognition precedes and guides language development. But more recent studies suggest that the two are intricately related: The relationship is reciprocal, one influencing the other from virtually the beginning of life. While infants have the same cognitive and perceptual foundation, there is growing evidence that language-specific grammar at all levels (phonology, semantics, syntax) affect the way we organize and perceive the world in a subtle but significant way. More specifically, language directs young children’s attention to specific properties of the world over others as they master their native language, and the language-specific categorization of speech sounds, object relations, and events can become an attentional default even in nonlinguistic contexts. My earlier studies as well as those recently conducted with colleagues at University of Vienna (funded by WWTF) suggest that depending on how much a semantic concept is entrenched in one’s language, it can significantly affect one’s memory and cognition, not only in tasks explicitly requiring linguistic processing but also in indirect tasks that does not require it. In other words, the language we speak can have far-reaching effects on the way we perceive and categorize the world as well as remember our experiences.

Research on language and thought makes an important contribution to our multi-lingual society, both local and global: The more clearly we understand how language affects our thinking process, the better we understand the extent to which speakers of different languages may differ in viewing the world. The research and its findings also contribute to improving education of children in multi-lingual contexts and promote better communication across different language groups. 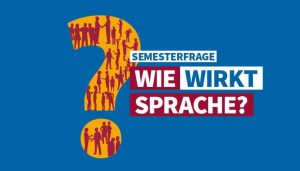 Our second week on our expedition aboard the RV Maria S. Merian brought us to northeastern Greenland into Dove Bay. In order to enter this area, we needed a certified marine mammal observer on board. Luckily, a colleague from the benthic ecology group had this certification. We saw groups of seals at the entrance of … Continued

Within the framework of the international project ECOTIP addressing tipping points in the ecology of the Arctic seas, three members of the working group on microbial oceanography from the University of Vienna were invited to join an expedition investigating major fjord systems in eastern Greenland. The expedition with the German research vessel Maria S. Merian started … Continued

Each of us has great power and it gets even greater when we act together. With this message in mind, molecular biologist Riccardo Trapannone and his colleagues started to promote sustainability at the Max Perutz Labs. Their data showed: Up to 50 per cent of the total waste from research labs could basically be recycled. … Continued