Atakan Aral is research fellow at the Faculty of Computer Science of the University of Vienna. In his recent project, he develops an intelligent monitoring system that tracks water quality in rivers and creates early-warning signals to fight river pollution.

Human activity and its impact on the earth resulted in new encounters between humans and other species. Consequently, almost all recent infectious diseases in humans, including Covid-19, are of animal origin (see United Nations Environment Programme’s COVID-19 response). In today’s interconnected world, awareness of environmental protection in a global rather than local sense is no more only a moral obligation but also a pragmatic one. Destruction of the environment, whether it be wildlife in Asia, rainforests in South America, or even rivers in Europe, affects the whole earth more rapidly and profoundly than ever.

What are micropollutants, and how they affect rivers?

Micropollutants are anthropogenic chemicals found in surface water around the world. They originate from personal care products, household chemicals, pharmaceuticals, pesticides, or as by-products in industrial facilities that use river water in their process. Despite their low concentration, micropollutants are extremely dangerous to both human health and the water ecosystem due to their highly toxic, endocrine-disrupting, carcinogenic, and mutagenic effects as well as their contribution to antibiotic resistance.

Wastewater is usually released to the rivers through water treatment plants, which are unfortunately highly prone to failures. In Europe, we have seen several disasters in the last decade, most recently in Finland and Poland. In the former case, 66 tons of nickel were released from a factory to the Kokemäki river unnoticed for 30 hours, whereas in the latter, wastewater from Warsaw containing 300 tons of nitrogen and 30 tons of phosphorus was freely discharged into the Vistula river for five days.

In the case of transboundary rivers, such as the Danube, which flows through no less than ten countries, international policies to fight river pollution are imperative. As a first step, it is vital to identify the discharge locations of micropollutants in a timely fashion.

How can information technologies help?

One of the areas that information technology would be the most helpful is modeling and backtracking micropollutant transport in rivers. In the SWAIN project, we aim to deploy smart sensors that track water quality in rivers and create early-warning signals for micropollutants in real-time. Moreover, the proposed system will make use of artificial intelligence techniques to locate the source of the pollution within minutes so that environmental disasters similar to the ones mentioned above could be avoided in the future. 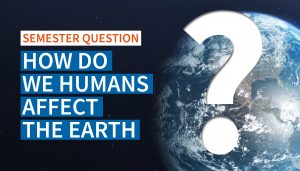 Semester question: How do we humans affect the earth?
The age of humans – the so-called Anthropocene – is confronting us with major questions about the future: What about global warming? What are the effects of environmental pollution on nature, animals and human beings? In interviews, videos and blog articles, the semester question of the University of Vienna attempts to identify the burning questions about the Anthropocene and demonstrate the answers academia can provide.

The decisions of the SWAIN early-warning system will not be purely based on data but a combination of scientific expertise and physical information. Therefore, the SWAIN consortium consists of a multidisciplinary mix of computer and environmental scientists from Austria, Switzerland, Finland, and Turkey. The project is coordinated and led by the University of Vienna.

A critical aspect of the SWAIN project is that the monitoring system has an extremely small ecological footprint so that it will not affect the very same environment it is intended to protect. We envision carbon-neutral and self-sustaining measurement stations as well as optimization of their number and placement in order to maximize collected information but minimize the impact on the river environment.

The SWAIN project is supported by the CHIST-ERA grant CHIST-ERA-19-CES-005, by the Austrian Science Fund (FWF) grant I 5201-N, and the national funding agencies of the participating institutions.